﻿Ever since New Goth City has been around (a mind-numbing 4 years this mid-September!), the Red Party has seen its share of ups and downs. What started at the Lower East Side's Orchard Bar, the Red Party saw it's beloved venue shut-down by the community board and the city who are trying to clean up the area by trying to rid it from the only businesses that stuck with the neighborhood when it was a filthy rat-hole known as Alphabet city! After that, the Red Party took some time off until finding a new venue...the second floor of Aces & Eights, located at nearby 1st Avenue, between 2nd & 3rd Streets. The new venue was actually quite nice, not to mention that the drink prices were probably the best in the city, and the quite glass-seperated lounge was very comfortable. But, alas, the venue was short lived, and the Red Party fell into oblivion once again! But don't you fret none, for like the majestic phoenix, arising from the ashes, the Red Party was resurrected once again at the newly re-opened Orchard Bar!
*cue applause and cheering sound f/x*
This party is the illegitimate and dirty bastard child of Djs Templar, Cyn, and Jarek who promote and bring forth the Red Party as a grassroots monthly Goth event which focuses mainly on the music rather than any pageantry. You come to the red Party to dance and bath in the music while enjoying the dark atmosphere and the company of like-minded friends, says me...not to be "seen" or bask in the throbbing glow of disco lights. This is Goth at its essence...relish in it...become one with it!!!

For those who have never been, here is what to expect: As you are about to enter the Orchard, located at 200 Orchard Street, you will be asked to show I.D....even for an old geezer like myself! You will enter and be greeted by the ever popular Mandana, who will serve as your door Goddess/Hostess and will promptly take your admission money with a wide smile in exchange for a hand-stamp. Then you will make the acquaintance of a rather long and narrow spaced bar that will serve as your liquid oasis. Try to stake a claim at the bar as soon as possible for it can get crowded very quickly if the dance floor isn't your preference.
Moving past the bar, you might be surprised to find a slight downhill slope that leads you to a small, yet intimate, seating area and the restrooms (Bonus tip: If the line at the main floor restrooms is too long from beer renters, turn 180 degrees around and find a door that leads to a stairwell to the basement...there are additional restrooms downstairs...just don't be too drunk and fall down the entire flight!). Beyond this area, to the left, is the backroom dance floor where the real magic happens!!!
Like any true, self-respecting Goth club event dance floor should be, it is devoid of flashy or obnoxious lighting, allowing the comfort of (slight) darkness to cover the dancing crowd like a welcome and protective shroud. This allows you to focus on the music, rather than a light show...so you can 'punch the giant' or 'kick the smurf' to your dark heart's content! As far as the Dj's are involved here, I'm not going to go on an ass-kissin', ego-stroking, love fest! Djs Templar, Cyn, and Jarek are legendary in this scene and really bring their craft to this party...'nuff said. Their guest Djs, on the other hand, are all a bunch of scallywags that need a stern whipping to get their shit in order! Just kidding!!! Their set lists are always spot on! Moreover, landing a guest Dj spot at the Red Party is a great privilege and will be impressive on any Dj bio. And in that regards, the Red Party is unpretentious and prefers to leave any and all drama out of its realm...easier said than done, I will agree, but all in all, the denizens that amass here on a monthly basis are, in the good part, a core faction of the N.Y.C. Goth scene and good friends...sans clique!
Hopefully the Orchard venue won't suffer any more of the troubles it has gone through in the past, and the Red Party can remain there for a very long time to come! It should also be mentioned here that the Orchard is also the venue for Dj Templar's Dark Bar gathering on the First Sunday of every month (Note: in September the Dark Bar will exceptionally be on the 2nd Sunday. Visit NewGothCity.com for full details)...think of it as Red Party Light, without the dancing and the early hours of 6pm to Midnight...but more of that in a later post! For now go and experience the Red Party for yourself, if you aren't already a devoted follower!!! 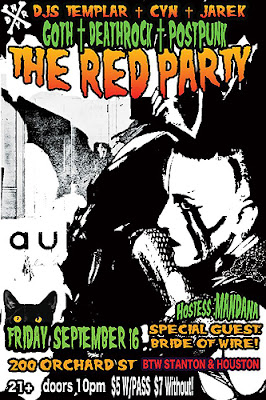 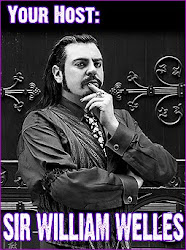 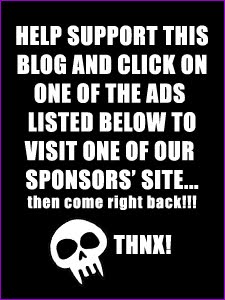